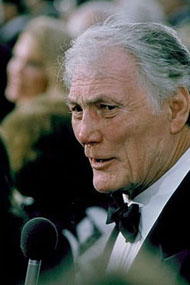 (NT) - A week of "Russian Nights" in Los Angeles culminated with an awards ceremony on April 22 at the prestigious Pacific Design Center in West Hollywood. The gala event was held at the end of a weeklong "festival that celebrates Russian contributions to the world of art." The program of cinema, theater and music visual arts was sponsored in part by the Russian Ministry of Culture and enjoyed the support of Russian president Vladimir Putin.

Scheduled to receive "narodny artyst" awards (cleverly translated as "the Russian People's Choice Award") were two Oscar winning actors: Dustin Hoffman and Jack Palance - both of whom trace their roots to Ukraine.

In accepting his award, Dustin Hoffman noted that his grandparents came from "Kiev, Russia" and expressed gratitude to the "Russian people" for helping defeat Germany. He thanked them for saving his grandmother who otherwise "may have ended up as a bar of soap."

Next in line for the Russian government's highest artistic award was Jack Palance. Born Walter Palahniuk in Pennsylvania in 1918, Palance won the Academy Award in 1992 for his memorable portrayal of Curly in "City Slickers". Palance, proud as a Kozak of his Ukrainian heritage, is chairman of the Hollywood Trident Foundation.

After being introduced, Palance said "I feel like I walked into the wrong room by mistake. I think that Russian film is interesting, but I have nothing to do with Russia or Russian film. My parents were born in Ukraine : I'm Ukrainian. I'm not Russian. So, excuse me, but I don't belong here. It's best if we leave."

Palance and his entourage proceeded to get up and go. He was accompanied by four other guests that included his wife Elaine, and the Hollywood Trident Foundation's president, Peter Borisow. Palance refused to accept the award, even in private, or to view "72 Meters", the movie being screened as the festival finale.

Speaking from Los Angeles, Borisow commented on Hoffman's statements: "I don't think it's necessarily Hoffman's fault. I think it's tragic that he doesn't even know his own family history. His ignorance of the basic facts is shocking. That Hoffman lends himself, hopefully unwittingly, to denigration of Ukrainians (and thus of himself), as he did by endorsing a festival that featured the highly offensive and racist movie '72 Meters' is very disappointing."

Borisow is referring to Vladmir Khotinenko's 2003 film "Syemdesyat-dva metra." A drama surrounding events on the submarine "Slavianka", the film portrays Ukrainians as bumbling fools and repeatedly refers to Ukrainians with the racist pejorative 'kh' word. As part of the film's plot development, the Ukrainian submarine's Russian officers refuse allegiance to newly independent Ukraine, steal the ship and sail it to Russia.

"This is a continuation of a centuries old effort to invent a history and culture for Russia by hijacking first the Ukrainian church, then Ukrainian history and finally Ukrainian culture," Borisow said. Borisow considered the festival to be part of a "coordinated, worldwide campaign to promote Russia and Russian culture and, in so doing, to make Ukraine seem part and parcel of Russia. "I'm certain that in Russia, Jack's acceptance of the mislabeled award would have been sold as his accepting being a 'National Artist' of Russia," according to Borisow. "Jack is very proud to be Ukrainian and will not let anyone hijack his name or persona," he said. In total, twenty films were screened at the Pacific Design Center's Silver Screen Theatre, including Ukrainian filmmaker Oleksander Dovzhenko's "Aerograd" (1935). The festival program did not mention that Dovzhenko was Ukrainian, and instead described him as "the son of illiterate peasants" who "incorporates elements of peasant lore and pastoral tradition."

"This latest incident is just another part of a long history of genocide that killed 10 million Ukrainians in 1933 and continues in more subtle form to this day - all of it still actively promoted and financed by Russia," Borisow said. Putin knows there can be no Russian Empire without Ukraine, so he is pushing the assault from all angles: military, industrial, energy, economic, religious and cultural.

The festival's website includes letters of greeting from actors Leonardo Dicaprio, Liv Tyler and producer-director Francis Ford Coppola. Previously held once in Germany in 2003, "Russian Nights" are scheduled to descend upon New York between October 23 and 30 later this year. (NT) 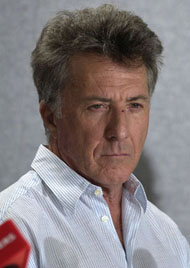